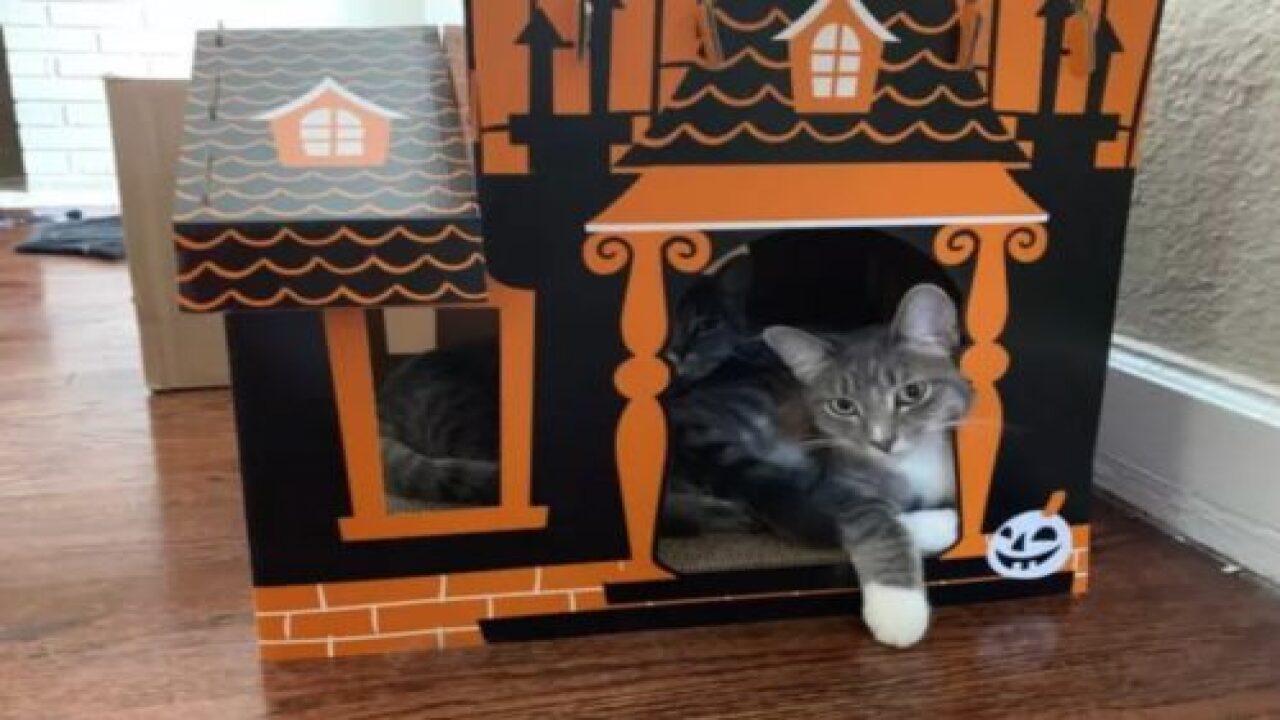 Human overlords to feline friends, it’s time to act like a cat with a wiggle-butt ready to pounce. The search for Halloween-themed decor that your cats will want to and should scratch is definitively over (was there a search? Does it matter now?!?). Get ready to move faster than your cat when it zooms out of the litter box because you don’t want to miss this.

Target has an adorable cardboard-scratcher haunted house for cats, and I don’t know about you, but I need one of these. I need to see one of my cats inside of the haunted house while the other is perched on the top (it’s two stories!). I need to take a picture of them doing this and send it to my friends who have cats because they’ll get it. I need to also send that pic to my other friends, so they’ll be forced to tell me how cute the whole scene is just to be nice.

For some reason, the product page doesn’t include photos of the haunted house in action, so here’s a photo from the reviews:

This cat scratcher from Hyde & EEK! Boutique (clever, clever) goes for $16.99 and is in limited supply at the Target closest to my house, so I might have to stop writing this so I can run out and get one.

This bit of joy — available for under $20 — comes flat-packed, so odds are good that if you order it online, your cats will be using the box it’s shipped in before they get to take over the haunted house proper. But hey, that’s just cats being cats. Hopefully, it’s not as complicated to put together as those bookshelves from Ikea:

The slew of positive reviews, giving the haunted house scratcher a 4.9 out of 5 stars, seem to confirm that it’s easy to assemble (whew!). One reviewer called it better than an hour of therapy. Another gushed, “Cinnamon and Nova LOVE their Spooky house!!! Cinnamon likes to rub against the chimneys. Nova likes to bring her toys to the bottom layer.”

Here are Cinnamon and Nova, who are obviously thinking to themselves, “Enough with the photos, we are trying to settle in here, human.” (Half the fun is in imagining what they’re saying about their new digs, obviously.)

One human with a more robust kitty mentioned reinforcing the cardboard with packing tape upon assembly to improve the structural integrity of the house, to which I say, well done, well done.

Because Target shoppers left so many photos in the review section of the product page, I am forced to share even more with you as I tell you about the home.

The main floor of this abode has a front door and a side door, which this little sweetie is casually lounging from like: whatever, I own this — as well as your heart.

The floors of this haunted house — both the interior and the rooftop deck, where your cats will surely be serving bespoke cocktails garnished with a sprig of fresh organic catnip at outrageous prices because they’re saving up to buy their own condo with south-facing windows — are made from that waffled cardboard that cats love to scratch.

Cats don’t like rules, and neither do I, so I really appreciated that the owner of a bunny decided to buck the idea that this is a cat scratcher and buy the haunted house for their adorable black bun.

I am obligated to let you know that Walmart also has a haunted house for cats (for $16), but it’s just a single story, boo:

See ya! I’m off to Target right meow.