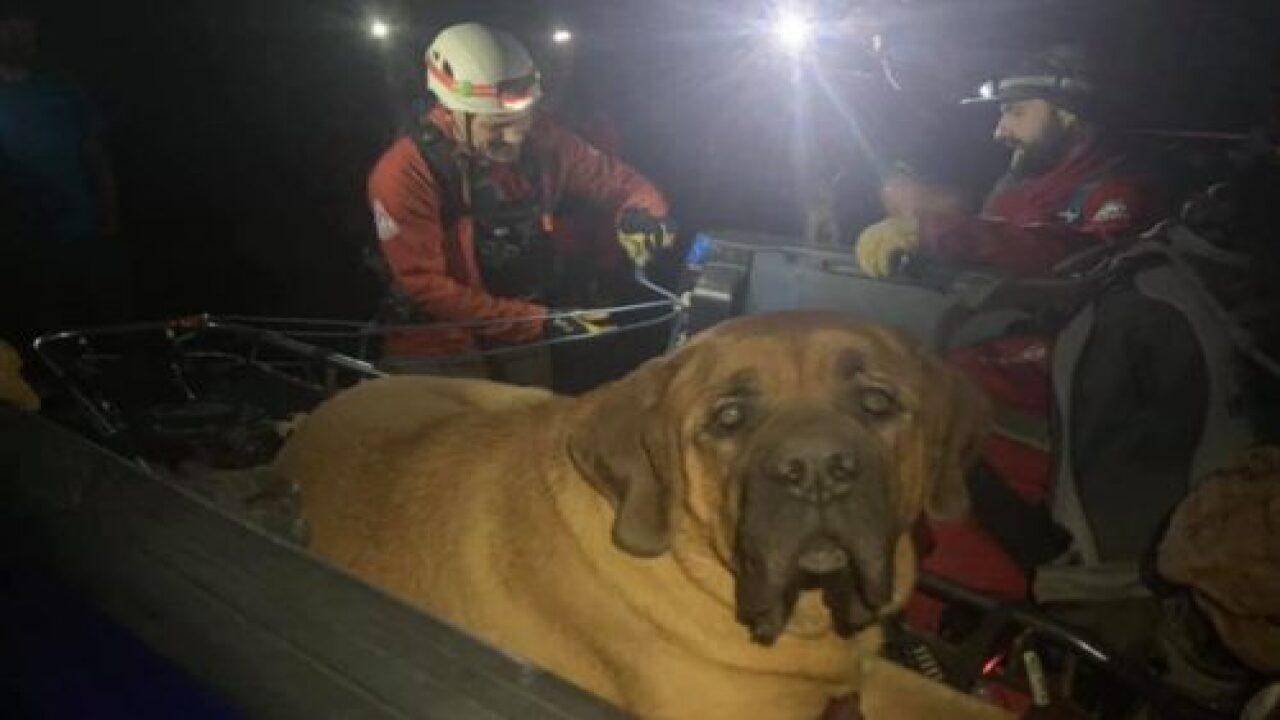 Hiking up a mountain can be exhausting! Just ask Floyd, a 190-pound 3-year-old Mastiff who recently went on a hike with his owner and extended family in Utah but was too tired to navigate back down the mountain when it was time to leave.

Fortunately, the Salt Lake County Sheriff’s Search and Rescue team was alerted to his condition by fellow hikers who called 911, and the all-volunteer organization rescued the giant dog by carrying him down the mountain on a stretcher.

The organization posted a video of the rescue to their Facebook page. In it, Floyd is very calm as he is being rescued by the team.

“They started hiking around noon and it’s usually a three-hour hike,” one of the rescuers, Todd Taylor, told Buzzfeed News. “But they were sitting up there for a few hours. He would walk a few feet and then sit down and his paws were hurt and cut up.”

According to Amy Sandoval, who identified herself on Facebook as the sister of Floyd’s owner, the family went hiking together and after taking a wrong turn on the descent, they ended up on a “very tricky slope.”

“We had a 10-year-old with us and it was so hard getting everyone back up to the trail. Poor dog just couldn’t take any more after that,” she wrote.

However, according to Sandoval, Floyd’s owner never left his side and, had the rescue team not showed up, was going to stay there with him overnight in the cold weather until the dog was able to walk down.

“Thank you to all the people who called the police and search and rescue,” Sandoval added. “A vet also stopped to exam Floyd and recognized what bad shape he was in….Thanks to all the nice hikers who offered us more water, as we used the remainder of ours to keep Floyd hydrated.”

Sandoval included a shout-out to her father, who made every effort to help Floyd and his owner. “And my rockstar dad who hiked down to the creek and collected more water for the dog and then hiked all the way back up, twice, to try and help my brother.”

According to the Salt Lake County Sheriff’s Search and Rescue Facebook page, Floyd behaved like a “good boy” during the four-hour rescue and was very happy to be assisted. He is now reportedly relaxing and recuperating at home.