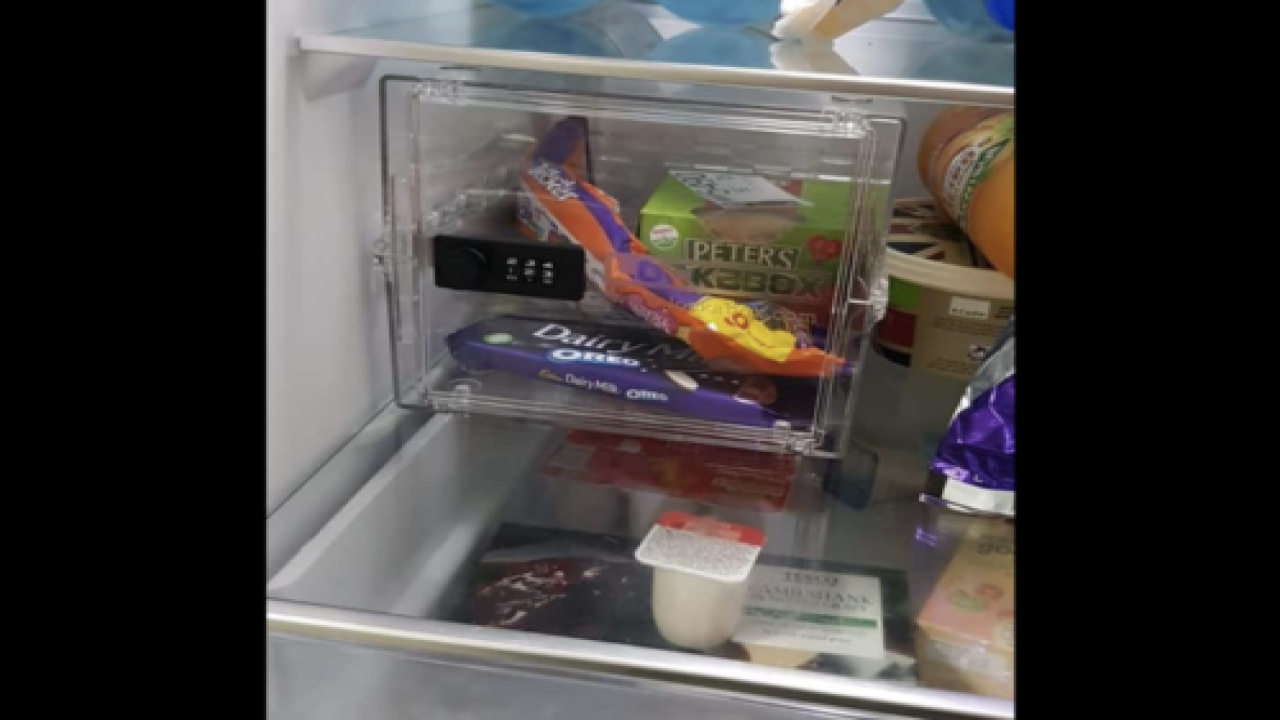 Have you ever tried to hide your snack stash from your significant other? Dave Williams of Wales, Great Britain took a pretty extreme measure to keep his fiance from poaching his chocolate supply — installing a safe in the refrigerator.

Stacey Lowe took to Facebook to share what her husband-to-be had done, and people thought it was pretty funny. The post went viral, racking up 54,000 reactions, 116,000 comments and more than 60,000 shares.

[Warning: there is profanity ahead.]

“So this is what it has to come to!” she wrote alongside photos of the safe. “You buy a house together, have a child together, get engaged, are planning a wedding and doing your house up and this happens!”

She later edited the post to include a link to Amazon for those who wanted to buy a similar safe, pictured below. She added that she might buy one herself, as “two can play that game!”

“I laughed at first, but then told him it’s like torture because I can see what’s in there,” Lowe told The Sun. “It’s like showing me what I can’t have. He’s saying he’s going to get another one for the cupboard now for his crisps and sweets.”

When it comes to her love of chocolate, Lowe admits that the sweet treat is her weakness.

“We are both foodies but I can’t resist chocolate,” she said.

She says that she does tend to steal his candy, especially during the late hours of the night when she gets up to feed the couple’s one-year-old child. Apparently, he got tired of it and searched out a solution, causing the mom to share her frustration with family and friends who know her habits.

Lowe didn’t expect her post to gain as much as attention as it did, but she said both she and her fiance are having a good laugh about the whole situation.

Although she hasn’t cracked the safe’s code yet, Lowe’s confident she’ll get to the snacks sooner or later.

“I know if I haven’t got any chocolate he will give in and share if I’m desperate, just to keep me quiet,” she said.

Despite the torture, it sounds like this relationship is still on solid footing — which is a good thing!

Especially since there’s been a sequel…

What a day for Lockabox! . Thanks to one of our customers, our product and their post, the Lockabox One went viral! ….Albeit a bit controversial ð . We are in disbelief! Currently at 97.6k Comments & 50.5k shares ð¤ª . You too can lock away your chocolates, cheese, pies or any sweet treats in any communal or shared living environment. ð¥ðªð©ð«ð§ . Available to purchase at www.lockabox.com, Amazon.co.uk, Amazon.com & Amazon Europe @lockabox #lockabox #minisafe #fridgesafe #chocolatesafe #treatcontroller #viral #safety #storagesolutions #fridgegoals #safebox #lockablebox #impactresistant #stackable #readytouse

“What a day for Lockabox!” the post reads. “Thanks to one of our customers, our product and their post, the Lockabox One went viral! ….Albeit a bit controversial ð. We are in disbelief! Currently at 97.6k Comments & 50.5k shares ð¤ª. You too can lock away your chocolates, cheese, pies or any sweet treats in any communal or shared living environment.”

Earlier this week, Lowe posted that she had received gifts from Lockabox, probably for giving them such a great chance to market their company.

“I finally have my own safe(s) — generously pre filled to keep from Dave,” she says in the post.

She edited her new post to add that her fiance is now trying to break into her Lockabox.

“How the tables have turned,” she wrote, showing off some images of the treats she received from Lockabox, which look like they include several types of Cadbury chocolates.

In fact, if the pictures are anything to go by, she is now the proud owner of no less than seven Lockabox safes in black, white and clear colors. She can pretty much lock up anything she wants from her hubby-to-be at this point!

We rather enjoy the sense of humor every party involved in this fun story has shown. Cheers!