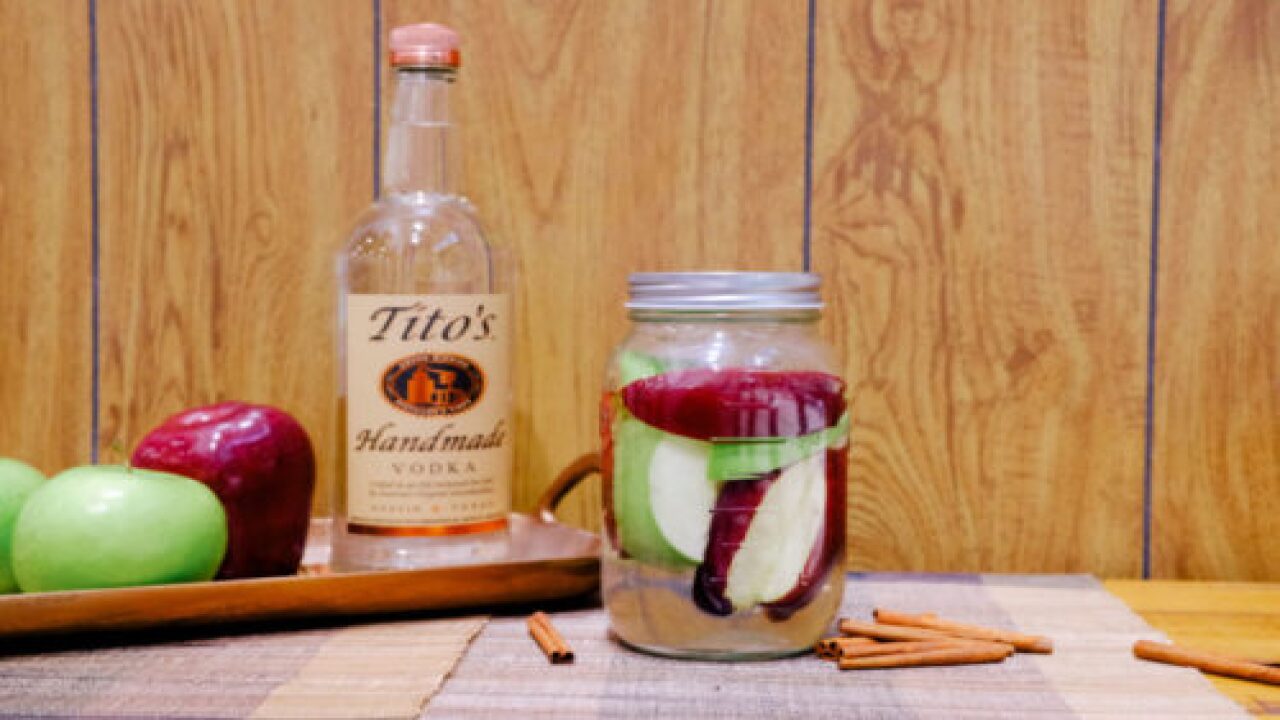 Heading to a wine tasting or having a drink with friends is one of my very favorite things, but when it comes to making my own drinks — well, it’s better that I don’t. I am simply no good at knowing what flavors go together. And as my friends can attest, I always use too much alcohol and not enough … everything else.

One thing I have not tried, however, is infusing my own alcohol. Basically, it means adding fruit or spices to your preferred spirit to change the way it tastes. You can pretty much infuse any alcohol, like vodka, whiskey or tequila.

With tequila, you might want to try something reminiscent of what you’d get in a margarita, like lime or strawberry. With vodka, the possibilities are nearly endless and can change for the seasons, like peppermint for the holidays or a recipe I just tried for fall — apples and cinnamon!

This recipe for Apple & Cinnamon Infused Vodka comes from Tito’s Handmade Vodka and was incredibly easy, even for me. All you need is your favorite brand of vodka, cinnamon sticks, two apples and a mason jar. You simply put the ingredients in the jar, close it tight and put it in a cool, dark place in your kitchen. You’ll need some patience, as it takes about five days to infuse fully, but you’ll get to taste test it each day!

So, does putting some cinnamon sticks and apples in vodka really make it taste like apple cinnamon? Well, friends, I am happy (and I’ll admit, kind of surprised) to report it does indeed!

I followed the recipe exactly, including the use of Tito’s vodka, and after just one day, the vodka had already darkened in color and took on a pretty delicious flavor. You could taste both the cinnamon and apples; the kick that comes with just taking a full-on vodka shot wasn’t as strong. (Yes, I tried it straight before jazzing it up.)

I will also tell you it took some serious willpower to not eat one of the apples, knowing it would already be delicious. Take a look at how the vodka looked on day one and day two:

Days three and four were pretty much the same, with the vodka getting a bit darker and taking on a stronger flavor. By day five, it definitely seemed like it was ready to be enjoyed fully.

While I am not one to drink anything straight and do not like shots, this goes down (probably too) easily and is perfect for fall. I didn’t try it warmed up, but I am betting that will be amazing as well. Here is day five:

If these classic fall flavors aren’t for you, you can find tons of flavored vodka options in stores, including Chilled Dills’ pickle and Skyy’s cold brew coffee and watermelon. If apples are your thing, you could also try this recipe for apple pie vodka from The Cookie Rookie that is a bit more indulgent, as it also includes simple syrup.

Will you be trying your hand at infusing your own vodka?