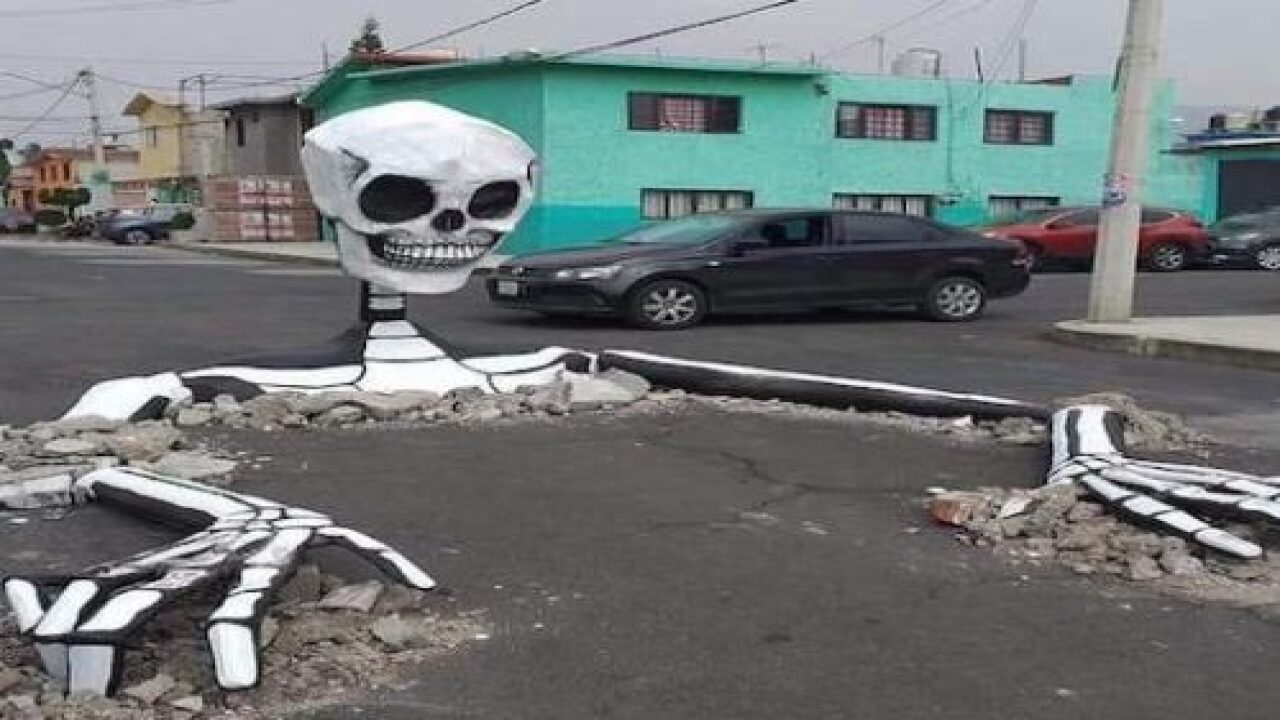 Day of the Dead (Dia De Los Muertos) is a multi-day celebration that lasts from Oct. 31-Nov. 2. each year. The holiday is believed to mark a time period when a passageway between the physical world and the spirit world is open, allowing the deceased to come back and visit the living. The Mexican holiday with Aztec roots is celebrated with music, food, parades and altars to the deceased. Skeletons and skulls are common imagery used in the celebration, with many people wearing face paint to resemble a skull.

For the past eight years in Mexico City, giant cardboard skeleton sculptures have been installed to look like they are bursting out of the asphalt in the streets in celebration of the holiday. They were designed by local artists from the Indios Yaocalli cultural collective, who placed rocks and concrete from a construction site around the skeletons to create the illusion that they were bursting out from underground.

Check out this photo of the display posted to Twitter by journalist Ioan Grillo:

Amazing Day of the Dead "calaveras" in the borough of Tlahuac in Mexico City. The skeleton breaking out through the road! pic.twitter.com/qsHKgl11KK

“Amazing Day of the Dead ‘calaveras’ in the borough of Tlahuac in Mexico City,” he wrote. “The skeleton breaking out through the road!”

Some initially believed the installation was a protest against potholes in the capital city, but one of the artists involved explained that they’re meant to preserve traditions and culture for future generations.

The skeletons are displayed prominently in the city center of the borough of Tláhuac, along Francisco Santiago Borraz Street. They measure about 3.5 meters (11 feet) in length and two meters (6.5) feet high.

Here’s another one of the giant skeletons. The image comes from Indios Yaocalli’s Facebook page on Oct. 27.

The significance of skulls during Día de los Muertos comes from the way they were once involved in Aztec ritual and used as trophies for battles. Small sugar skulls decorated in paint, glitter, and beads in a folksy style are often placed on the celebratory altars, along with favorite foods of the deceased, their personal mementos and bottles of tequila or Atole (a traditional hot corn-based beverage).

What a fantastic and interesting way to bring attention to this important cultural celebration!