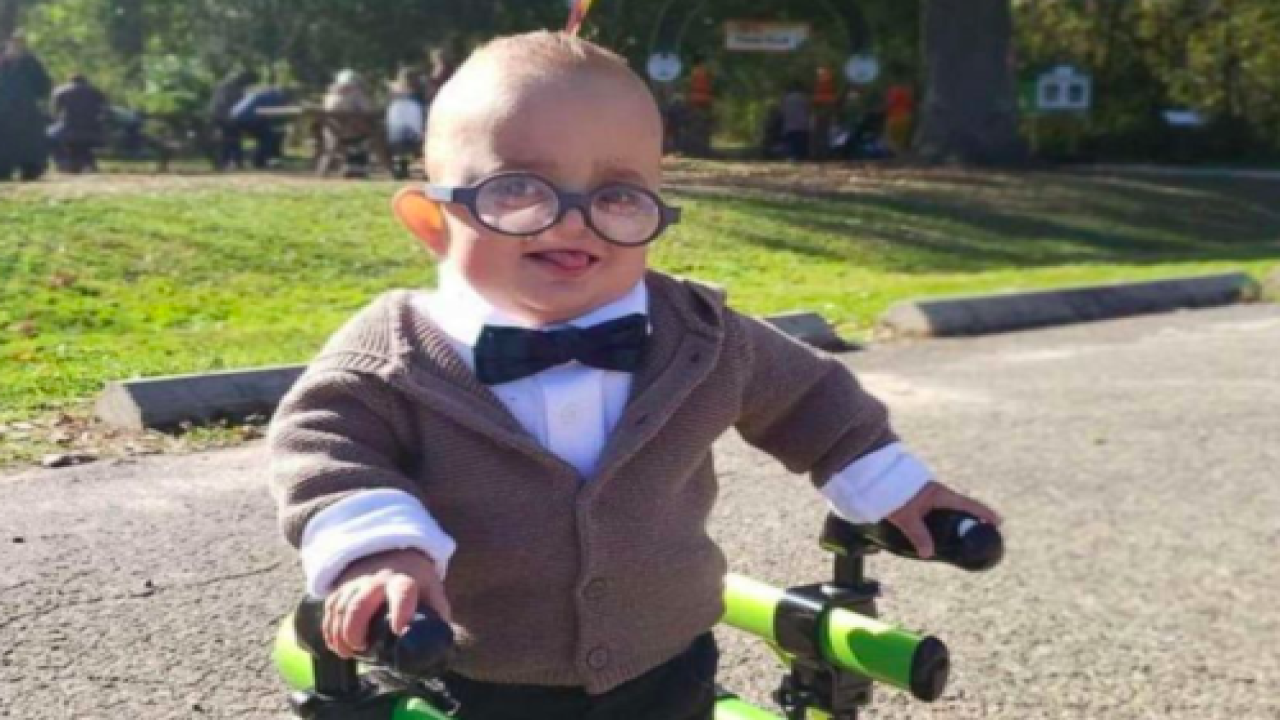 Plenty of kids’ Halloween costumes are super-cute, but not many are super-cute and inspiring. Ohio 2-year-old Brantley Morse nailed both counts in his outfit based on the movie “Up.”

With his cardigan and bowtie, Brantley, who has cerebral palsy, looks a lot like Carl Fredricksen, the hero of Disney-Pixar’s 2009 smash. His mom, Brittany Morse, told Akron Children’s Hospital that she wanted Brantley’s medical equipment to be a part of the costume, too, to show how he’s making the best of his disability: Sure enough, his walker works as an analog to Carl’s cane, and Brantley’s glasses look like Carl’s, too.

Naturally, a few balloons tied to the walker complete the adorable look — in the movie, Carl is a balloon salesman who sails away to South America after tying hundreds of balloons to his house.

Cerebral palsy affects muscle tone and movement, according to the Mayo Clinic, including balance problems, stiff muscles, involuntary movements and difficulty speaking or eating. It’s often caused by brain damage that occurs before birth, and is diagnosed in the early years of life.

The hospital said that Brantley also lives with lung and kidney disease and gastroparesis, a condition where the stomach doesn’t empty itself properly. Nevertheless, he was ready to party at the fall festival where he donned the costume, and plans to keep celebrating the holiday. It’s the first year he’s had a chance to dress up for Halloween!

Here’s another snap from @akronchildrens on Instagram, showing the balloons more clearly:

It is Brantley Morse’s first time dressing up for Halloween, and he definitely got in the spirit! Brantley’s mother @brittanymorse4 wanted to incorporate his medical equipment in the costume to show the world that Brantley is making the absolute best out of his disabilities. Brantley was born at only 24 weeks gestation and since then, he has been beating the odds while fighting cerebral palsy, stage 3 kidney disease, chronic lung disease and gastroparesis. The 2 and a half year old got to test out his costume as Carl from the movie “Up” at a fall festival last weekend and is looking forward to celebrating Halloween this year. #Disabilityawareness #cerebralpalsy #pixar #up #Halloweencostume (Illustration credit of Carl from “Up”: Disney/Pixar)

The post reveals that the boy was born at 24 weeks and “has been beating the odds” ever since.

Brittany Morse, Brantley’s mom, told ABC News that the toddler’s already had 10 surgeries in his two short years of life. Even with all of his challenges, “he is always able to put a smile on his face and others’,” she said, as reported by Good Morning America.

This kid’s a survivor!

“It’s so much more than JUST a Halloween costume — it’s the constant battles this little man, and our entire family face on a daily basis,” Morse wrote on an Instagram post sharing a local news article about her son. “It’s spreading POSITIVITY and HAPPINESS even when things are hard. And it’s helping others whether you are supporting them emotionally, educating them, or just lending a piece of advice.”

Here Brantley is, from his mother’s Instagram page at @brittanymorse4, trick-or-treating with his family in costume (minus the cardigan in some images because of the heat).

Trunk or treating fun with the kids! It was a little toasty yesterday, so Brantley couldnt wear his full get up (the cardigan had to go). Maddie was a softball player, although she looked like Mike Clevenger ð. Jake was Brightburn, but was also too hot to wear his mask. And of course Brantley was Carl from Up! So much fun! 1 more weekend of dressing up â¤

This story is — dare we say it? — uplifting. Way to go, Brantley!