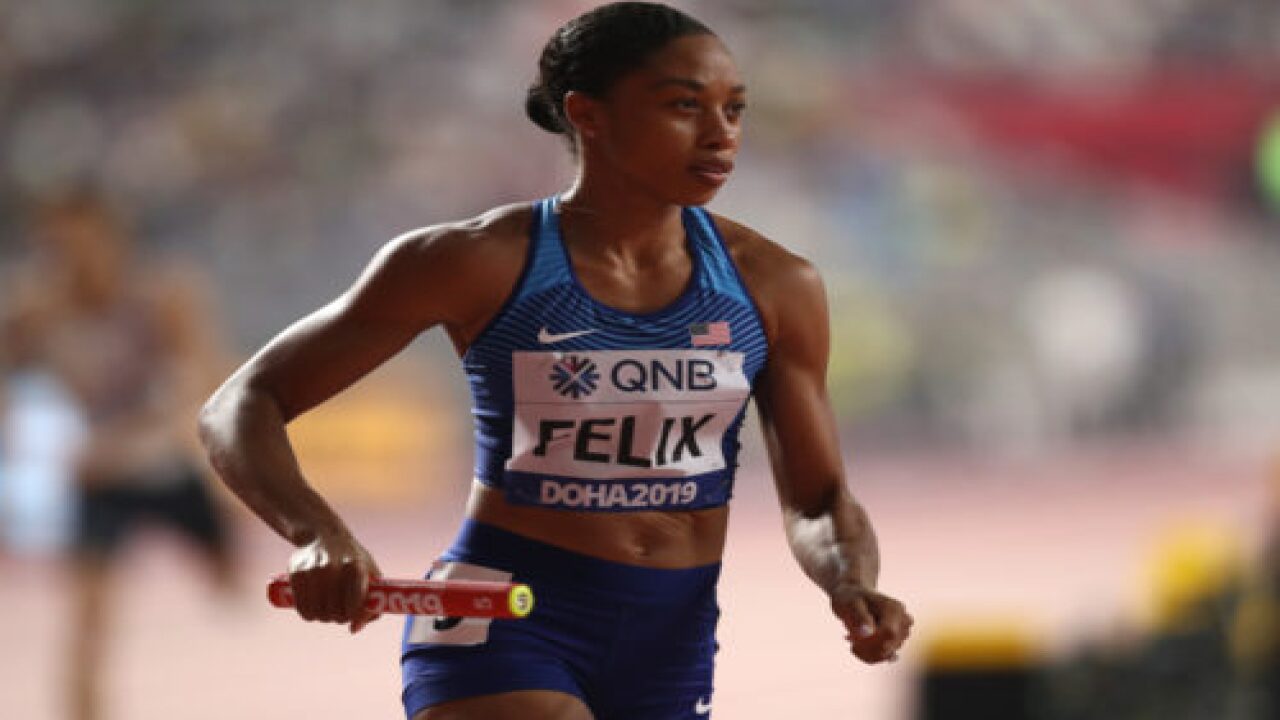 Allyson Felix just set a huge record in running. The track-and-field superstar won her 12th gold medal at the International Association of Athletics Federations World Championships on Sept. 29 in Doha, Qatar, breaking her tie for the number of medals won with another iconic sprinter, Usain Bolt.

She earned the medal running as a member of the winning four-person U.S. national team in a new event, the mixed-gender 4×400-meter relay, which will debut in the Olympics next year in Tokyo.

Felix, 33, had a baby less than a year ago, and she is looking strong.

“So special, to have my daughter here watching means the world to me,” she told NBCSN. “It’s been a crazy year for me.”

Felix had her daughter, Camryn, in November after a difficult pregnancy: pre-eclampsia led to an emergency cesarean section at 32 weeks and her premature baby spent a month in the NICU. It was a stressful time, made worse by the pressure she felt to return to training as soon as possible and her up-in-the-air contract negotiations with Nike, who was her primary sponsor at the time.

But it turned out Felix isn’t just a champion runner — she’s a champion of motherhood. She was already one of the most decorated athletes in track and field (of any gender) when she decided to come out in defense of pregnancy and motherhood rights for female athletes earlier this year by sharing her story about renegotiating with Nike.

“Despite all my victories, Nike wanted to pay me 70 percent less than before. If that’s what they think I’m worth now, I accept that,” she wrote in an op-ed in the New York Times. “What I’m not willing to accept is the enduring status quo around maternity. I asked Nike to contractually guarantee that I wouldn’t be punished if I didn’t perform at my best in the months surrounding childbirth. I wanted to set a new standard. If I, one of Nike’s most widely marketed athletes, couldn’t secure these protections, who could?”

She says that Nike declined to make accommodations for her recovery. Her old contract expired.

Soon after she and several other female athletes broke their nondisclosure agreements to talk about the financial penalties they faced after they became pregnant, Nike announced it would waive performance-pay reductions for 12 months for athletes who decide to have a baby.

Her husband and baby girl were there to greet her after her race:

Racing this weekend was much bigger than me. About so much more than my own story. In the face of many obstacles it’s so important to never give up. I was reminded of that this past year more than ever • Grateful for my health. Thankful for my family. Humbled and appreciative of all the supportðð¾

It seems that standing up for her right to both be a mother and have a career has been transformative for the athlete. As she wrote in that Instagram caption, “Racing this weekend was much bigger than me.”

In February, Felix posted a photo of her baby girl Camryn on her Facebook fan page with a few words that say it all: “By far my greatest accomplishment.”

We have a feeling that even with a new record number of running medals, she feels the same way.

Congrats to Felix for every single one of her accomplishments, on the track and off!